Hello! My name is Eliza Pancakes. I live here in Willow Creek at Pique Hearth with my Husband Bob and our dog Buddy.

Buddy is very clearly Bobs dog, sometimes Bob comes home late from working at the restaurant and Buddy is always there to greet him. When we adopted Buddy we thought we were getting a male dog but when Buddy arrived and went into heat we quickly realized we had female oops. Still a Newbie with CAS I guess.

Bob loves watching cooking shows for inspiration. One day he is going to be a Celebrity Chef. I think that is just so awesome! I do only want the best things.. er the best for my family.. yeah. Bob mentioned he wanted to have children while we were still young adults. Our relationship isn’t perfect but who’s is? I stopped taking my birth control so, I guess we will see what happens. Maybe having a baby will bring us closer? 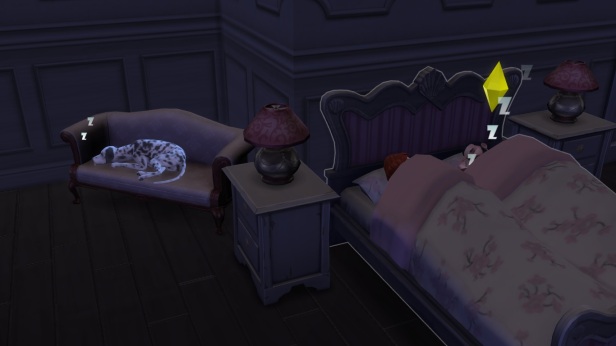 Well that was surprisingly fun maybe this won’t be so bad after all. For a moment there it was like we had our “spark” back.

Maybe if Bob lost a little weight I would be more attracted to him so I sent him out with his dog to go for a jog. I am pretty sure he just went for a short walk but at least he was out of my hair for a while. Seriously, since we had the nooboo talk.. that’s all he’s interested in.

I took this time while I was alone to do some reading up on parenting and oh my what have I got myself into! I was starting to feel sick so I rushed to the bathroom where I stayed for most of the day.

Buddy and Bob came home and I was still cuddling the toilet. I told Bob I was fine to go to work and I was just washing up. So he left for work. Buddy on the other hand stayed right by my side. I think she knew what was going on and was trying to cheer my up. At least until she discovered herself in the mirror. I thought that was so funny I giggled and pee’d myself how embarrassing! I guess I better hop back into the shower. Pregnancy is hard, I am miserable.

A couple of days later Robert was born.

Bob is through the moon happy to have a little boy! He wanted to celebrate with you guessed it a woohoo. So I called a nanny, poured a drink, and got down to business. Here we go again!

One thought on “Chapter 1 We are the Pancakes”