Welcome back to the good life! 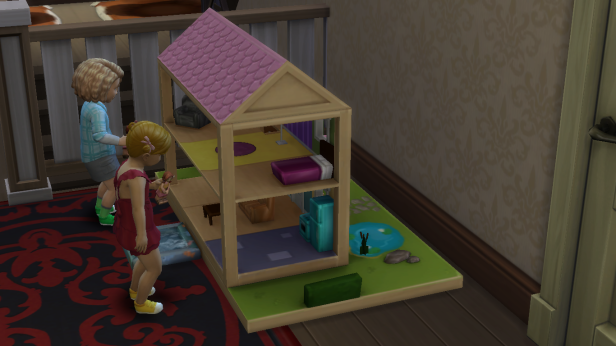 Chelsea recently hit toddler stage. Having two toddlers in the house has been a bit of a handful. The times like these though when they play nicely together are so precious. Meaghan and me talked about having another baby. I am still wanting to try for a little boy but Meaghan said she is done. I’ll respect that I mean she does do a lot around the house caring for two little tots and three large dogs while I’m off making gains in my athletic career. Gaining a little fame along the way. I suppose it’s time to pay back that old friend that helped me with the funds when I got this place.

“There Nancy that should cover what I owe you for the down payment.” I passed her an envelope.

She opened it pulled out the check to read it before slipping it in a desk drawer, “Hm, well you’re a little short.”

“What are you talking about? That’s paid in full!” I nearly shouted the words.

“Sorry my friend you forgot to include interest.” Nancy glared back at me.

“Oh come on, with your new celebrity status I’m sure you won’t have any trouble repaying me. unless you want me to tell that pretty little wife of yours just how you managed to pay for the house and climb to fame so quickly.” She smiled.

“I’m not sure I understand what you are referring to?” I questioned.

“Oh puh-lease you really think you made the team on your skills alone. When you came to me you were a nobody, no money and many mouths to feed. You know you only made the team because they were desperate after a certain unfortunate accident. What was his name again?”

“You had something to do with that… what kind of sii-”

“Shut up!” Nancy interrupted, “I had to ensure you made the team there was no way you’d be able to pay me back if you hadn’t. The way I see it you still owe me.”

“Prove it.” She challenged.

“Insurance! A time well come well your skill set well come in handy to me and you better not let me down or I’ll make your world come crashing down on you so fast. They’ll think you were behind the whole thing.” She turned the screen to me with a video clip of the former ball player being struck by a masked man.

“No one’s going to believe that’s there are forensics and stuff they’ll figure it out.” I was starting to panic and I know it could be heard in my voice as hard as I tried to hide it.

“Are you sure about that? Detective Landgrabb is on the case searching for the perpetrator who is still at large and he seems to match your description should I give him a call and tell him you’re here to turn yourself in then?” She pulled out her phone and starting dialing.

“No please, I’ll do what you want.” I gave in with a sigh of defeat.

“Now that’s more like it. You may go now I’ll call on you when the time is right.” with a wave of her hand she dismissed me.

How did this go so bad so quickly? I dragged myself home feeling like the bad dog returning after a run away tail between the legs. When I got home I felt the need to blow off some steam.

I guess life was just too good to be true. I should have known better than to trust that snake. I’m in the dog house now who knows what she has in store for me.

Speaking for dog house. Jogging with my doggo’s usually puts me in a better mood. at least if only for the moment. I could only stand a short jog as the cold winters air numbed my skin. 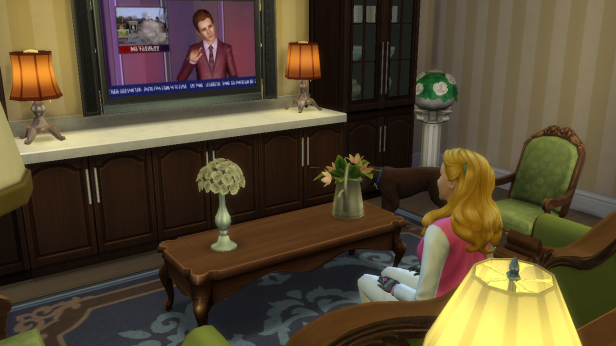 When we got back Meaghan had put the girls down to bed already and I found her plunked in front of the TV. It’s not typical for her to watch television though she often tolerates watching sports and sizing up my competitors with me. I decided to join her and discovered she was glued to a news broadcast.

“Just an update on what’s going on in Selvadorada.” She answered.

“What are they saying?”

“Nothing new really they don’t understand what caused the land to shift. Those poor poor people so many are still missing and there are rescue crews.” Meaghan explained.

“I hope they find everyone.”

“Me too.” she agreed solemnly.

“Any news on our rocket launcher?” I asked hoping to lighten the conversation.

“Mind if I change the channel the news bums me out.”

We watched Winter Sim Games for the rest of the evening. I thought of telling Meaghan about what was going on. It was enough of a distraction to keep my mind busy from thinking about my problem.

It snowed so much overnight that we had a weather advisory to stay indoors. The extreme cold temperatures forced us to wear our warm winter gear inside. I feel wretched with quilt there must be someone I can talk to. Maybe if I reach out to the former player I saw in Nancy’s video. It’s a long shot but there’s a chance he got a glimpse of his attacker maybe he can clear my name? My problem is I don’t even know his! I decided to give Don Lothario a call. he has been benched all season and his game has been off but he’s a veteran on the team he must know who that guy is. He agreed to meet me and I guess he wasn’t far away because he came right over.

“Hey snow day! I’m not complaining, come on let’s get inside.” “Nice home you got here.”

“Heh, yeah thanks.” I thought about the high cost of having this home and my heart sank.

“To be honest, I’m surprised you called for a house visit. Normally we meet at the gym. Are the guys coming too?”

“No, actually I just wanted to talk to you about something.”

“You’ve been on the team for a while right?”

“That guy who was injured right before I joined the team did you know him?”

“Know him! He was my best friend.” He exclaimed. 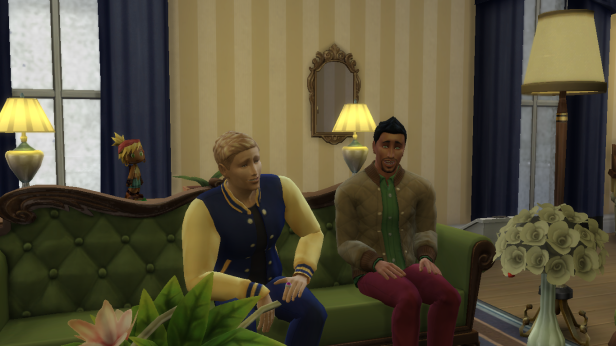 “Yeah we were in separable in high school. We joined the team at the same time. A shame he was the best ball player I’ve ever seen. Well, after the accident he kinda went nuts. I can’t say I blame him. I mean he’ll never play again, and that’s all he lived for.”

“What exactly happened? The accident I mean.” I asked.

“I don’t know he never said. The guy kind of fell off the face of the planet.”

“Hah so he took the first rocket ship outta here.” I joked referencing Liberty Lee’s recent stunt we both laughed.

“Might as well have though, I haven’t heard from him well, since the accident. Why do you ask?”

I sighed loudly I so badly wanted to come out and tell Don about what was going on but I don’t know him all that well outside of work. So I lied, “Just saw something strange and thought it might have been connected.”

“Strange? Like what kind of strange?” he asked. The tone in his voice changed a little and I could tell he was feeling tense.

“But it could be something?” his brow furrowed and he started wringing his hands.

“Well I couldn’t know for sure unless, maybe if I talked to your friend. Think you can still get in touch with him?”

“Oh, right yeah uh.. I’ll see what I can do. Look I gotta go now.” Don stood to his feet and made his way to the door.

“Okay thanks for coming, let me know if you get in touch.”

“Bye.” He left in such a hurry I wonder what spooked him. Was it something I said. Could Don have something to do with all this he sure got weird fast.

I spent the rest of most of the day with my baby girls. I actually had a lot of fun with my girls we watched cartoons and sports we played dolls and for the first time this week I felt like a good parent. 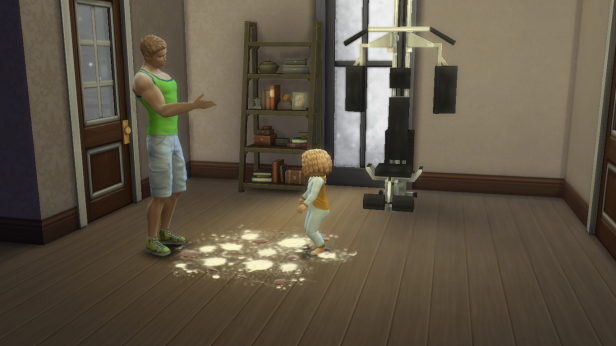 Though it did get a little messy at times.

Being home all day with the kids and dogs really made me appreciate Meaghan even more she makes it look so easy. She’s the real MVP in this family I on the other hand have struck out. Hopefully Don will come up good with the assist.

3 thoughts on “Chapter 4 The Good and the Bad”