Hello My name is Stephanie Hawthorn and that’s my boyfriend Eric Koehler. We recently came into a bit of money and ran away together to Willow Creek and bought some property Potters Splay. With the remains of our inheritance we built our dream home. 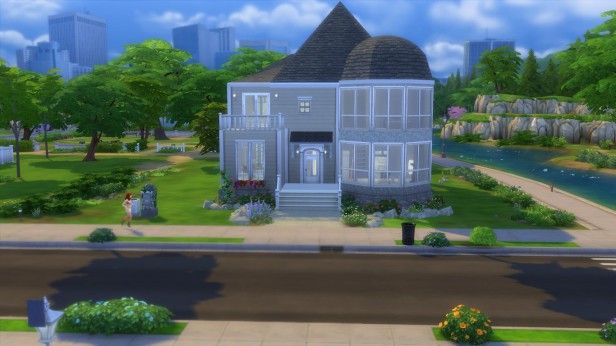 A three bedroom two and a half bath two-story abode. It was so much fun designing this house and picking out all the little details. It was a lot of work though and took us a bit of work. Once we built it we didn’t have a lot of cash to furnish it so we had to make some quick cash.

I am pretty creative so I started out by painting a few masterpieces to sell and I collected a few seeds and have been selling my produce. Eric got a job in business and a few promotions helped us to furnish the place.

When I’m not painting or gardening I am practicing Yoga and Playing Guitar. One day I want to open my own yoga studio and hopefully with Eric’s Business experience he can help me with that. I don’t know the first thing about business and who am I fooling I am still learning this whole yoga thing so that won’t be until later in life. My true life aspiration is to be a super parent! I haven’t talk to Eric too much about that yet he has been so busy working lately as we are a little house poor now.

I’ve also been spending a lot of time learning the cooking skill they say a way into a mans heart is his stomach and I think I want to keep this one around for a while. I was thinking of talking to Eric this morning about some of my life dreams but he seemed to be tense about something so I just let it go. After finishing his breakfast he rushed off to work.

Eric’s Tense mood made me feel uncomfortable so I decided to enjoy a herbal bath. I was feeling a little grimy after tending the garden and my yoga practice and this was a great way to unwind. The doorbell rang just as I was getting out so I quickly spun into my everyday outfit and answered the door.

It was Clara Bjergsen! We played a game of chess and chatted for awhile. She insisted I throw a housewarming party and that she would bring some guests as we really hadn’t met any of our neighbours yet.

When Saturday Night came I had my housewarming party. I met so many new and interesting people and hopefully I will be able to form friendships out of these acquaintances. We ended up partying pretty late into the next morning and Eric and myself slept in really late. The house was a mess so I started cleaning right away Eric finally rolled out of bed and came into the kitchen looking for food. I told him there was some leftovers and he wolfed it down barely taking the time to chew it.

I was moping up some foreign puddle on the kitchen floor when he got down to his knees at first I thought he was helping but then he pulled out a ring and proposed right there! Obviously I said yes and was thrilled when he mentioned he too was ready to start a family!